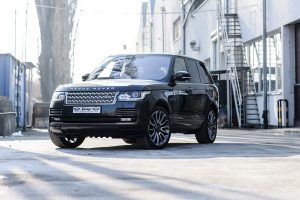 Land Rover has dominated the luxury SUV marketplace for years, as they continue to offer increasingly impressive car models. Although at first primarily used for tough off-roading and agricultural usage, Land Rover is now known for its extravagant features and state-of-the-art systems, along with the exceptional durability and performance capabilities that it has maintained throughout the years.

Land Rover offers both Land Rover and Range Rover models, however, many people question what the actual difference is between the two.

They certainly resemble one another, have similar names, require a generous payment, and are both manufactured in Britain.

So, how are they different?

The General Difference Between Range Rovers and Land Rovers

They are not separate companies, but the same company manufacturing different models. Land Rover is the name of the brand, and the Land Rover vehicles, which includes the Range Rover, are simply subsequent models.

This confusion generally comes from people referring to the Range Rover models as its own brand.

All Land Rover vehicles, including the Range Rover, value versatility and utility. They all feature extreme off-roading capabilities and luxurious interiors and are great choices that are worth the price.

However, the Range Rover simply places an additional emphasis on luxury and refinement. Land Rovers are more of the generalized (while still exceptional) utilitarian models with more off-roading capabilities, while Range Rovers feature more premium components and are not expected to be seen off-the-road.

Range Rover SUVs include the following models, which are all technically Land Rovers themselves:

So, why are Range Rovers the most luxurious choice? Well, it’s best to answer this with a little history of the Land Rover brand.

As mentioned before, Land Rovers were first designed for agricultural, rough use and meant to withstand practically anything. However, since that target market was rather small, Land Rover worked to create a more city-friendly SUV, hence, the Range Rover.

With the Range Rover, Land Rover combined luxurious features with the durability and off-roading capabilities of the other Land Rover models.

When the first Range Rover was released in 1970, it was an instant favorite, which is why Land Rover shifted its focus to luxury SUVs. With this new model came a new trend as well: the trend of leisure SUVs, rather than SUVs only for off-roading.

To Sum It All Up…

As a result, Range Rovers are generally more expensive and feature more premium perks, which vary depending on the specific model. However, all Land Rover models are certainly worthwhile products.

Need Land Rover Repairs in Raleigh or the Triangle?

Look no further than Triangle Imports for high quality import repairs in Raleigh. Our team of experienced Land Rover repair tech’s can diagnose and solve your vehicles malfunction. Give us a call today at (919) 828-7900 or complete the contact form to schedule your appointment!