The Porsche 924 is a classic sports car that was in production from 1976 to 1988. It’s a two-door coupe that was the first to be offered with a completely automatic transmission. At the time it debuted, Excellence magazine referred to the 924 as “The best handling Porsche in stock form,” and was lauded for its appearance and body style, fuel economy, and handling.

If you have a Porsche 924, you may have discovered that it won’t 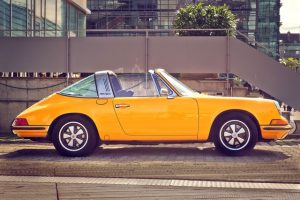 idle, a common issue for this make and model. Once it starts moving, the car runs well, but if it’s idling while at a red light or in park, it sputters out or dies. So, what’s causing this not-uncommon problem? Let’s explore when your Porsche 924 won’t idle and the factors behind those reasons.

A Comprehensive Tune Up for Your Porsche 924

Having a thorough tune-up done by an experienced import repair team in Raleigh can be all you need to get your car running smoothly. Not only will having clean air filters, spark plugs, belts, and hoses help your car to run better, but part of the tune-up process is checking the idle.

An experienced mechanic who is knowledgeable about Porsche 924s will verify the car’s idle speed, idle mixture, and check the O2 sensor. The O2 sensor is necessary in the fuel control feedback loop, determining how much oxygen is in the exhaust. When the O2 sensor is degraded, the catalytic converter isn’t able to clean the exhaust, and these can lead to problems with your idle.

If your idling problems originate due to your car being cold or when it’s been sitting for a few days, and you’ve already done a comprehensive tune up, there is most likely an issue with a component related to fuel, meaning these vehicle components may be to blame:

Also called the cold start valve, this component is used to boost the amount of fuel going to the engine and enrich the fuel mixture, specifically when the engine is cold or when it’s very cold outside. When it’s cold, air density rises and additional fuel is needed to start the car, so if the cold start injector isn’t working correctly, it’s unable to supply the increased fuel which means your Porsche 924 won’t idle, and it may not start at all.

The continuous injection system, or CIS, is a mechanical fuel injection system used in the 924. It is designed to continuously pump fuel into the engine’s intake. Because it’s not electronic, there’s not a system that determines the amount of fuel to inject or when it is needed. Instead, the injector releases a fine spray that is constantly being released in varying flow amounts.

If you can activate the fuel pump and observe how the injectors spray fuel (using a glass container to catch the fuel), this can tell you if there are concerns. If the fuel doesn’t spray in a cone-shape, and instead it dribbles, sprays unevenly, or is lopsided, the injectors need to be cleaned or replaced.

With this system, any vacuum leaks can be problematic, so it’s important to make sure the FI boots on the fuel distributor and the throttle body aren’t cracked or dried out. Also, fuel lines, air valves, and wiring may all play a role in how the system is functioning (or malfunctioning if there are idle issues).

If the smaller components of the CIS aren’t the problem, you may be facing an issue with the fuel pump itself. Doing an ECU Output test can check its control pressure and functionality even while it’s not running.

If your 924 only stalls or dies when it’s warmed up, (ie, it’s only a hot-start problem, not a constant problem regardless if the vehicle is cold or hot), and you’ve already had a tune-up from an import specialist in Raleigh, your vehicle is probably having difficulty sustaining fuel pressure.  Again, it’s important to look at your fuel injection system, because there could be a leak or blockage in your intake system. If that’s not the issue, consider the following components:

Used to manage the engine idle speed,  this component adjusts the idle speed based on the temperature of the engine and electrical system needs. If you experience hot-start stalling, the ICV may be failing, preventing any air from being available to maintain an idle.

Contact Us for Porsche Service and Repair in Raleigh

If your Porsche 924 isn’t idling or stalls out, we want to help. Call our Porsche service and repair team in Raleigh at (919) 828-7900 or fill out our contact form to schedule an appointment and learn more about our import services.